Campers, hunters and wilderness lovers alike have probably encountered a black bear or two in their day. Unlike animals like deer, it’s often difficult to discern a black bear’s age—which can make hunting them tricky. 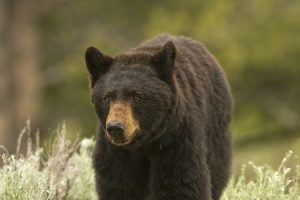 Here are some tips on how to tell the age of the next black bear you encounter:

Bass Pro suggests trying to divvy the bear up into three categories before deciding whether or not you want to try to shoot him. The bear may be either too young to shoot, between 1 and 2 years old, an average bruin, around 3 to 4 years old, or a large mature bear, five years and older.

If you’re unsure where to categorize the bear based on size, observe their behavior. If you’re a novice bear hunter, it’s a good idea to watch videos of older black bears, compared to younger black bears, so that you can see the differences between their behaviors. Older, larger bears have more weight to move around and tend to shuffle and lumber, while younger, lighter bears are more excited and exuberant. Plus, if other bears tend to run away when a particular bear approaches, he is likely older and much larger.

Once you’ve observed their behavior, take one last look at their heads: the triangle formed between the two eyes and the nose can also indicate the age of a bear. Older bears will have wider triangles, because of their broader, fully-grown skulls. Younger bears may have a narrower triangle, indicating that they still have some growing to do.

If you have an itch for a black bear hunt after reading this post, learn more about the black bear hunts here at Burntwood Lake Lodge. Call us at 1-877-358-2259 to book your hunt today!