North America is home to large concentrations of bull moose, and they attract wilderness lovers because of their massive size and interesting traits. 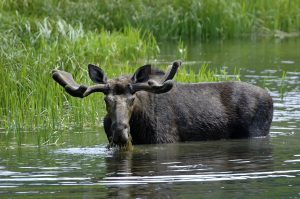 Bull moose are actually docile and predictable creatures, making them a top pick for hunters in the Burntwood Lake area.

One distinct feature on a moose is the bell, which is a long flap of skin located underneath the throat. Scientists aren’t sure about the function of this saggy organ, but they are lead to believe that it helps the male moose attract female moose.

A bull moose’s off-white antlers are another defining feature on the animal. They get into some pretty rough duels with their antlers, which can grow up to six feet across and weigh 70 lbs, in their most fully developed state. That’s about the weight of a large flat screen TV!

Male moose for the most part enjoy their solitude all year, only becoming more aggressive with each other during mating season. This season usually runs from September to October and it is during this time where they spar with each other in order to claim dominance.

Before a match, the bull moose will sway its head to show off its antlers and then will walk stealthily toward its opponent. Sparring also allows the bulls to test their own physical limitations.

Because moose can’t sweat, they prefer to migrate to cooler climates and places where snow covers the ground annually. These traditional twig eaters can be found grazing in Canada, Alaska, and the New England area. Some moose are also prevalent in parts of Europe.

Experience the thrill of a moose hunt; book yours with us today!