The fall hunting season started off with fisherman, bear hunters and a duck hunter. The bear hunters didn’t fare so well as the bears would not come to the baits no matter what we put in them. The fishermen kept track of the fish caught a total of 377 in 4 days!  Our duck hunter fed us his bacon wrapped duck for the week.  Can’t get enough of this delicacy!  When he wasn’t hunting he was out looking for big northern.  For the amount of time fishing there was some nice pike 13 over 30” with the biggest being 39”.

The moose hunters arrived on September 17th.  The week proved to be successful with 2 bull moose tags filled. Mid-week, guide Leo had a moose coming and another smaller one swam from behind them across the river and his guest filled his tag.  The next day, guide Johnny called a nice moose in.  The hunter had the horns and head in the scope at 30 yards and didn’t feel he had a good enough shot.  The following day, Leo had another one coming to the call and the hunter dropped the shooting stick and that was it for the bull moose.

Rain, high winds, and fog slowed down the second week of hunting.  Mother nature at its finest!  This didn’t stop our guides and guests from getting out there.  Joe took his new guests out and saw a bull in the river but didn’t get close enough to get a shot.  Tuesday was calm in the morning and guide Joe heard 2 in the Hunting River.  Guide Leo and guest heard a call from down the Burntwood River but couldn’t get close enough for a shot.

The third week started off the same, heavy fog in the mornings and later in the week 25mph winds and 10” of snow! Guide Leo and guest headed for the spot he had heard the moose down the Burntwood River and it paid off with a smaller bull. Our successful hunter also saw a huge black bear and bought a tag in case their paths crossed again.

Guide Johnny went back to his secret spot where he had heard a moose on the first week but it was scared off. After calling for a few hours, the moose came back out of the bush and his guest was able to fill his tag with a beautiful 16-point rack.

In all it was a good season with great guests, good food and lots of laughs. Hope to see you all next year! 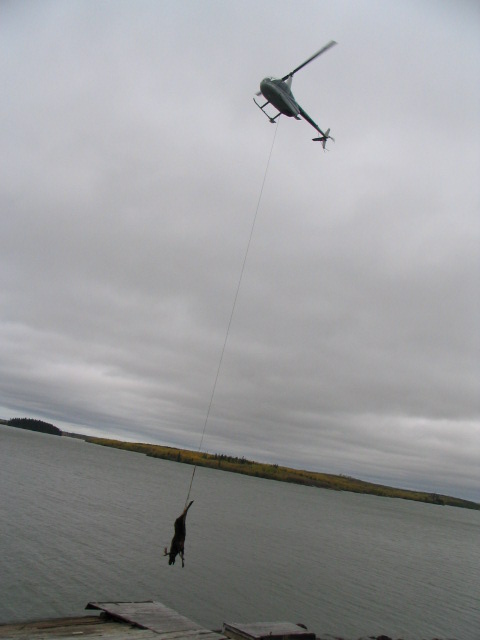 Hello to all of you moose hunters!  Ever wonder if there’s a more efficient way to transport a bull moose from the kill site to Burntwood Lake Lodge?  Here at BWL we like to make this step as easy as possible by using one of our Robinson 44 helicopters to sling the moose out.  By using this method of transport, makes it a bit easier on our guides and insures that meat wastage is never an issue.

The video you will view is a bull moose being slung from a hunting site approximately 15 miles from the town of Snow Lake, Manitoba onto the local hunters flatbed trailer.    Slinging Moose with Heli 2015

Are you searching for the perfect big game hunting expedition embark on this fall?  If so, you should visit Burntwood Lake Lodge, the preeminent hunting destination in Manitoba.  Our always popular guided moose hunts are now back, as moose season runs from September 23rd through October 7th!

One of the most unique characteristics of hunting at Burntwood Lake Lodge is that there is no resident or local hunting, only fly- in hunting is permitted.  This leaves the game all to our visitors, as competition with the locals is avoided.  Burntwood offers fully guided moose hunts with the most elite guides who can lead you to the trophy of your dreams.  Central Manitoba is renowned for having big game moose with big racks, and our guests have captured moose with racks ranging from 50 inches all the way up to 63 inches.  What a wonderful addition to the mantle that would be!

Right now is the treasured rut season, which ensures the ubiquitous moose will be plentiful.  Your guide can help you call out to the moose and answer their calls.  Burntwood’s customers have over a 90% opportunity rate, while 75% is the norm for the success rate.  It is truly a wonderful opportunity to finally get that big game trophy that you have sought after for years.

Included in our 2012 hunting package is a plane flying from Snow Lake, MB, and a return home with your game.  Also, three meals a day, fishing, government taxes and a hunting license is all included in your package.   We will also cape and dress your game.  Now is the time to reserve your trip as the moose rut season will be over before we know it.  Please contact us for reservations or to ask us any questions.  Best of luck to you this hunting season!