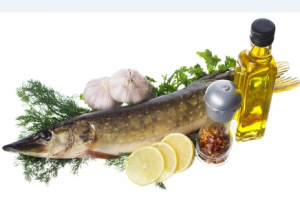 People who come to Burntwood Lake Lodge in Manitoba love to catch Walleye and Trophy Pike, among other fish.

To cook Walleye, get a large skillet and warm it up over medium-high heat. Heat up some butter and vegetable oil in the skillet. Them, take your Walleye fillets and place them in the pan, cooking until they’re golden brown on both sides. The fish should flake easily with a fork after 3 to 4 minutes per side.

If you want to bake Walleye fillets, dip them into a beaten egg. Then take them and press them into your bread crumb mixture. Place the fillets on a baking sheet and put them in the oven for about 20 minutes at a temperature that’ll properly cook them. A variation on this would be to heat the oven to 500 degrees (260 C) and place fillets skin-side-down, covered with butter, in a 9×13-inch baking dish. Sprinkle lemon pepper and basil on top. At this heat, it’ll take about 7 minutes before the fish is opaque and easily flakes with a fork, ready to eat.

Frying Walleye takes no more than four minutes at 375 degrees. You can use vegetable, peanut or canola oil to deep fry them.

As for Trophy Pike, while most people like to show them off to friends rather than cook and eat them, it’s possible to prepare them for a meal– yes they have a lot of bones, but no, they’re not inedible.

Consider roasting Pike in the oven. You can make an insertion from the anal fin to its head and then remove/discard the innards. Rinse what’s left under cold water and make four diagonal cuts through the skin on its uppermost flank in order to allow sauce to penetrate. Using a baking tray with peeled white onion and lemon to form a bed for the Pike, lay the fish on top.  Pre-heat your oven to 375F/190C. Next, your sauce can be made from two ounces of melted butter, the juice from half a lemon, a tablespoon of chopped parsley, and a grated garlic clove. Heat and pour this sauce over the Pike. Cover the baking tray with aluminum foil and let it bake in the oven for 25 to 30 minutes. The Pike is fully cooked when you can insert a skewer into the thickest part of its body with little resistance.